From illness to wellness

Cancer known medically as malignant neoplasia, is a broad group of diseases involving unregulated cell growth. Cells divide and grow uncontrollably, forming malignant tumors, which may invade nearby parts of the body. The cancer could also spread to more distant parts of the body through the lymphatic system or the bloodstream.

Tumors are not all cancerous; These tumors are called - benign tumors. They do not invade neighboring tissues and do not spread throughout the body. Although benign tumors will not metastasize or locally invade tissues, some types may still produce negative health effects. They can compress tissues and may cause nerve damage, reduction of blood to an area of the body, tissue death and organ damage.

When cancer begins, it invariably produces no symptoms. Signs and symptoms only appear as the mass continues to grow or ulcerates. The findings that result depend on the type and location of the cancer. Few symptoms are specific, with many of them also frequently occurring in individuals who have other conditions. Thus it is not uncommon for people diagnosed with cancer to have been treated for other diseases to which it was assumed their symptoms were due.

Cancer diagnosis is always a very difficult situation for a patient or a family member to deal with. The patient is now confronted with fears and questions never even thought of before. Modern anti cancer therapy consist of three basic treatments:

Gene therapy, immunotherapy and anti-angiogenesis therapy is currently being developed. These therapies are evidence based and common knowledge in orthodox medicine. Often the oncologist or general practitioner is not aware of the alternative support treatments available.

In the last 30 or more years Complementary and Alternative Medicine has become more and more popular with patients. In the field of chronic and life threatening diseases where orthodox medicine is not able to provide a cure, patients are looking for other alternatives.

Herbalists use young twigs and leaves [Viscum Album] Mistletoe to make medicine. It is popularly used in Europe, especially in Germany, and used for treating circulatory and respiratory system problems.
The use of Mistletoe extract in the treatment of cancer originated with Rudolf Steiner, the founder of Anthroposophy. He compared the parasitic nature of the mistletoe plant to that of cancer, and believed that cancer represents a faltering of the body's spiritual defenses. Some anthroposophical mistletoe preparations are diluted homeopathically.

Although there have been few claims that Mistletoe reduces tumour size, proponents believe that it stimulates the immune system, promotes the reversion of cancerous cells to more differentiated forms, improves general well-being and may improve survival, especially in patients with cancer of the cervix, ovary, breast, stomach, colon and lung. Proponents also recommend its use in certain conditions that place them at increased risk of cancer, such as ulcerative colitis, cervical dysplasia, leucopenia, Crohn’s disease, papillomatosis of the bladder or colon, and senile keratosis.

Medication is prepared from the whole mistletoe plant. Mistletoe is harvested twice a year. In summer, when the plant has reached the peak of its vegetative development, and in the winter, when its development of buds and fruit is at rest and has more or less come to a halt. The mistletoe preparations are derived from the plant grown on specific trees.

is injected subcutaneously into the abdominal wall, or near the tumour site if possible. The treatment regimen is adjusted according to the patient's general condition. It requires that injections be given 2-5 times per week. 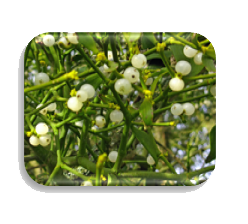 The word 'mistletoe' [Old English mistiltan] is of uncertain etymology. It may be related to the German Mist, for dung and Tān for branch, since mistletoe can be spread in the droppings of birds moving from tree to tree.

Mistletoe is a parasitic plant. It does not grow in the soil, but in the bark of trees. It grows perpendicular to the branch in which it thrusts its sucker, and it does not obey many of the laws of the plant kingdom. For instance, its berries ripen in winter, without warmth. It stores up chlorophyll and is green all year long and is indifferent to light. It is thus neither, geotropic or phototropic and this is the fact that fascinated Kaelin and Leroi both Anthroposophical researchers.

Mistletoe plants grow on a wide range of host trees, and commonly reduce their growth and can kill them with heavy infestation.

Most mistletoe seeds are spread by birds that eat the fruits. Depending on the species of mistletoe and the species of bird, the seeds are regurgitated from the crop, excreted in their droppings, or stick to the bill, from which the bird wipes it onto a suitable branch. The seeds are coated with a sticky material called viscin. The viscin survives such treatment and any bare seed that touches a stem sticks tenaciously. The viscin soon hardens and attaches the seed firmly to its future host, where it germinates and its haustorium penetrates the sound bark.

Mistletoe, figured prominently in Greek mythology, and is believed to be The Golden Bough of Aeneas, ancestor of the Romans.

Several studies indicated an improvement in immune function, quality of life and even survival. The vast majority of articles on clinical results are therefore in German and in non-peer reviewed journals. However, a number of clinical studies and review articles have now appeared in the English-language literature. Proponents advise that Viscum Album is compatible with chemotherapy and radiotherapy, and usually administered before surgery.

In cultures across pre-Christian Europe, mistletoe was seen as a representation of divine male essence [and thus romance, fertility and vitality]. According to Pliny the Elder, the Celts considered it a remedy for barrenness in animals and an antidote to poison. When Christianity became widespread in Europe after the third century AD, the religious or mystical respect for the mistletoe plant was integrated to an extent, into the new religion.

Mistletoe medication's mode of action and used for :

Act on many levels, with the pharmacology only partly elucidated to date. Studies and clinical experience have shown that the preparations have both cytostatic and immuno-modulatory actions. Bone marrow function is also stimulated.

Compatibility with other medicaments.

Viscum Album therapy can be given during chemotherapy, hormone treatment and radiotherapy. Interaction with other medicaments have not been reported. The injections must not be mixed with other preparations.